After much online conversation via E-mail the chapter has decided not to accept the task of building the model of the CSS Alabama for the Alabama bicentennial event. There was some discussion of utilizing existing models that members have as part of an existing display should we be asked to.
The IPMS national convention is scheduled to be held in Chattanooga in 2019 and two ways that HPMS could be involved in this were discussed. The first was the idea of a 'club' build for this event. There was mention that a club 'build' had been done a number of years ago for an event. The decision at this point was to table this until the time when we are closer to the actual convention time. The second was a trophy package for this convention. The theme of this package would center around the 50th anniversary of the landing on the moon in 1969 noting the part Huntsville and the Marshal Space Flight Center played in this accomplishment. The idea of calling it the 'Rocket Man Award' was discussed as was the idea that HPMS would 'own' the award. This was also decided to be tabled until we are closer to the actual event.
Due to the booking situation at the Jaycee's building the HPMS show and contest for 2017 is to be held on 26 August 2017, this does not give us a great amount of time to prepare. A discussion regarding fees for tables and contest model entries was discussed. The decision was made to use the 2015 table fees, but changes were made in the model entry fees. This was based on the idea of increasing the number of contest models covered in the initial fee. This breaks down as 5 model entries for $10.00 and then $1.00 for each model after the first 5. The junior category would $1.00 for each model entered with $3.00 being the top amount a junior would have to pay. The idea of a special contest category was discussed with the idea of 'Paper' entities. 'Paper' would be models of items that did achieve production status but a prototype was built, examples of this would be the Sargent York vehicle or the F-107 jet fighter. These would all have to be real world items not science fiction or space items. A vendor coordinator was asked for and Skip volunteered.

A number of HPMS members attended to show and contest in Atlanta, GA. There was good amount of model on the tables with a heavy turn out of figure models. The vendor turn out was light and was not viewed as impressive, appeared to be a clearance of older stock items.

Trevor Bennet - Dragon 1/35 scale M-60A3 tank with interior. Trevor is working on an after market engine compartment for this model, impressive work. He also had the 1/35 scale Husky that he entered in the Atlanta show and took the best U. S. military vehicle award.
Andy Brezinski - Andy has done further work on the chassis of his FLD 120 Freightliner, looked good. He also explained how he had to modify European type truck wheel hubs to the American configuration. Also showed weathering and dull coat work on the parts he displayed.
Martin Burkey - Martin brought a number of items to the meeting. Johnny Quest Dragon Flay, KA Models 1/350th scale carrier crew figures, 1/350 scale Lone Star Models tanks, Bobcat 1/48th scale YAK-28, Kitty Hawk 1/48th scale Banshee jet fighter, Roden 1/48th scale T-28, Shapeways Tyderion Shuttle nose, and a number of decal sheets, reflective, for various applications and decal sheets of aircraft markings.
A note on the February Show and Tell. One of our new members, I did not obtain his name, came to the meeting late with a diorama that will be impressive when he completes it. The main piece is an X-Wing fighter placed in a maintenance bay. The X-fighter was a toy, in which he fabricated the interiors. He has to fabricate the walls for the maintenance bay and added
some other details. 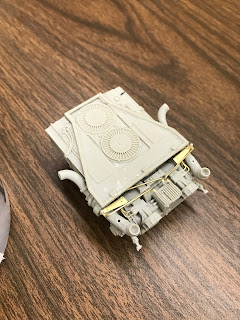 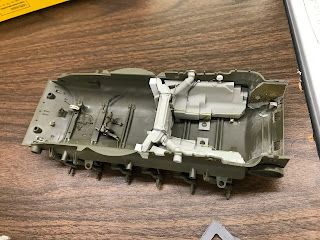 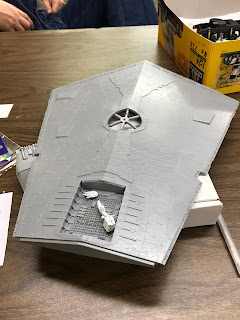 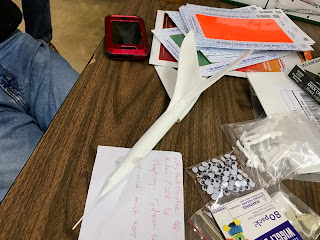 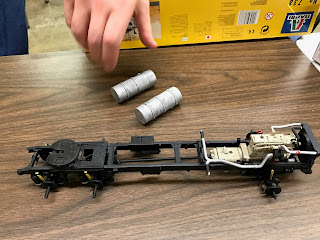 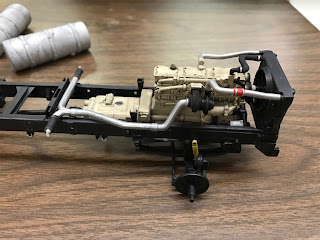 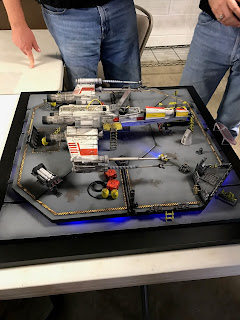 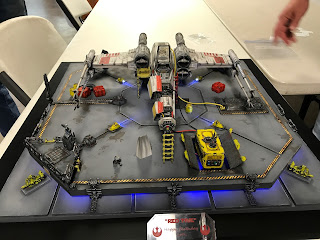 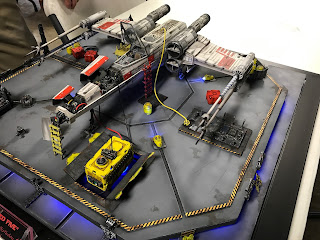 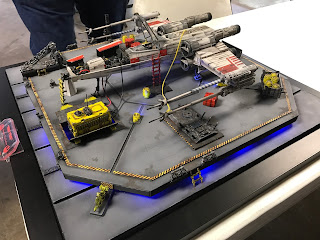 Posted by Huntsville Plastic Modelers at 8:39 PM No comments: